Shannon Nixon (nee O’Brien) is Enterprise Sales Manager QLD at Amazon Web Services and she spoke about the impact of the 4th industrial revolution at the Mobile-ising Women in Business event in Melbourne on 29 August 2017. Shannon talked with Biz Better Together about the unprecedented pace of change and how greater access to cloud computing is enabling faster innovation and changing the way we work and live. 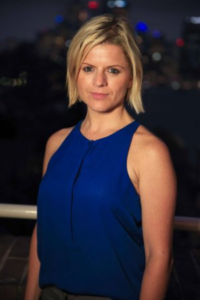 With the advent of cloud technology, you are able to democratise services that previously were not available to everyone, often due to cost. You now have start-ups that are able to access the same platforms that enterprises and governments do for a very low cost, enabling them to get up and running and experiment and innovate. That’s changed the way we are able to do business. Disruption is occurring within industries and the speed at which innovation is occurring is something we haven’t seen previously.

When you look at things like artificial intelligence, the internet of things and deep learning you are now able to access those services on a low cost pay-for-what-you-use structure, instead of having to go out and purchase large devices to enable you to do the work that you need to do. So for organisations who want to disrupt or for organisations that are just starting out, that’s a game-changer for them.

Especially for start-ups, funding and  cash-flow are critical and being able to access systems like artificial intelligence and deep learning, at a lower cost and enabling them to experiment at a low cost and fail at a low cost and iterate from that, is really critical.

You now have university students experimenting on the platform and coming up with some amazing concepts that they are now ready to take out into the real world. One of the great stories that have come out of this is about a group of students from Stamford University, doing mass data analysis of eye images. They’ve basically started with the question, ‘How could you do early detection of diabetes-related eye disease?’ Previously doctors would have to go through each image and l

ook for the markers that something is changing, which takes a couple of minutes for each image, so it adds up to a lot of time. Using our platform, the students imported 80,000 images, and using our services will shorten the amount of time for doctors to see those changing patterns, and so patients get earlier warning.

This is just an example of some of the things we are starting to see, that blurring of the lines between technology and biology. There are so many opportunities out there with applying the likes of machine learning and deep learning and to start being able to do more predictive diagnosis, and more earlier warning diagnosis, so it’s a very exciting time in the industry as a whole.

It’s touching not just one specific vertical, it’s touching everything. You look at manufacturing, financial services, agriculture, all of those areas are able to take advantage of the technology existing today and what’s going to be coming out in the near future. It’s tremendous.

Synergy between the smart phone and the cloud

It’s interesting to see what impact mobile devices have had. If you look at India, for example, they’ve leapfrogged the laptop and they are heavy mobile phone users for internet. There is a correlation between smart phone usage and the advent of cloud, it would be great to see a bit of Freakonomics applied to that to see what the linkages would be and the causal effects. Certainly providing access to applications and information in the palm of your hand drives a different behaviour and you have a lot of individuals like young adults who want to code and pull up some applications that go on the smart phone; they are creating applications at home and making them available in app stores.

I think it is a factor that these two technologies emerged at around the same time. If you look at an organisation, when they want to interact with their customers a lot of it revolves around examining how they can improve their digital footprint and their digital interaction with consumers. Whether it’s checking-in online with an airline, or ordering a cab, there’s been a lot of focus understandably on digital, and it’s what we talk to a lot of our customers about.

What I’m finding interesting now is the next layer, which is around natural language processing. Now we are starting to see people moving from working on their phone to speaking to a device. In the US for instance, with the Amazon Echo, which uses Alexa, you can stay at home and do your banking by speaking instructions instead of using an app on your phone. So a lot of it is being driven by the advent of cloud and connecting everything, and smart phones are a component of that.

Information at our fingertips

Because people are able to put information out there straight away, through whatever application, whatever news feed, whatever social media, we’ve become so much more connected and information is available so much more readily. It means we almost get impatient when we’re not getting updates every five minutes because we’ve gotten so used to it, we’re connected all the time. What’s underpinning that is not always thought of, what’s taken for granted is that what I hold in my hand is a really powerful device that allows me to  do a whole heap of things from my online banking to looking for a recipe to planning and booking my next holiday.

Now with devices like the Amazon Echo you can do so many things including connecting up your house so you can voice-control your lights, or heating or so on. You can also get apps on your mobile that connect up with this system.

We have an amazing story of an AWS engineer who has an autistic child, and he’s used some of the AWS technology to create a system he can use to communicate more effectively that is part of an effort to provide more independence for his child.

This technology is changing the way we are able to interact, it’s enabling improvements in health diagnostics and it’s providing a new method to reach consumers.

What does this technology mean for your business?

These days almost every organisation has a website, and companies want to connect with customers online. Traditionally, licencing for software and the installation cost of hardware like servers has been expensive. With AWS, you can access the technology you need as you need it without having to commit to expensive licencing or significant infrastructure investment.

In order to succeed at innovation you need to fail often and fail fast, and having the opportunity to do so at a low cost is invaluable.

If you have an idea or want to experiment, and you think there are too many barriers, or it’s too expensive to access the technology or even that you don’t even know where to start, this cloud technology enables you to make that start, at a low cost, enabling you to experiment.

Another empowering aspect of access to this technology is the ability to remain flexible; as this pace of change is faster than anything we’ve ever seen and shows no sign of slowing down, it takes away the pressure to try to forecast what technology and services you’ll need into the future. You can access and use what you need now and revisit as those needs change with time.

Consider the implications for companies doing research and development. This type of model allows you to be able to spin up some AWS services just for that day, or just for a few hours, to test out a new concept, and then shut it back down again, and pay only for what you use. That’s a completely different way of working. The faster you can experiment, at a lower cost, the quicker you can make discoveries.

That’s a really powerful thing because it enables you to experiment through to innovation. Anyone now can have access to artificial intelligence services, to cloud based services on a pay-for-what-you-use basis. Technology is an enabler and it’s going to enable us to tackle some of those big global problems. It’s not just a game-changer for organisations, or even communities; on a larger scale it’s potentially world-changing.