The Australian Financial Review (AFR) this year celebrates its Platinum 70 Years of existence.

The AFR began as Australia’s first national newspaper 70 years ago on August 16, 1951. It began as a 28-page weekly tabloid, selling for one shilling.

Seventy years ago, the first editor of the Financial Review complained that “no more disastrous series of financial proposals can ever have been presented to Parliament”.

The masthead’s 2021 editor-in-chief, Michael Stutchbury says that the 2021 Josh Frydenberg and Sir Arthur budgets represent practical bookends to John Maynard Keynes’ theory that budgets should be used to manage the booms and busts of capitalism, rather than just be government bookkeeping exercises.

“The Financial Review has provided the first draft of the history of Australian business, and the nation, over the past seven decades,” Michael said.

“This undertold history is interesting for its own sake. But the worth of our Platinum 70 coverage will lie in explaining how and why Australia and Australian business got to where they are now, and what that means for the decades ahead.”

At this video conference, AFR’s esteemed Editor-in-chief gave business leaders across the country his thoughts on the current COVID19 situation, Australia’s health and economic management, federally and by the states and territories, and his views on Australia’s political landscape during these extraordinary times.

Over 100 business leaders sung “Happy birthday” to the Financial Review and thanked Michael & his colleagues for their contributions for covering the machinations of Australian business over so many years! 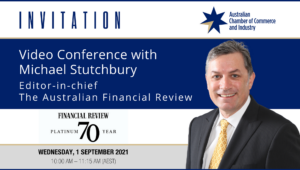