Australia is going to be smaller, and the population will age more rapidly – that is the snapshot from the Federal Treasury.

The intergenerational report is released roughly every five years, and it’s intended to guide government spending over decades. This one shows more people will need to rely on the government – and there will be fewer people to keep the economy working.

In June 2021, the Federal Treasurer Josh Frydenberg released the 2021 Intergenerational Report. The report projects an outlook for the economy and the Australian Government’s budget over the next 40 years. It examines the long-term sustainability of current policies and how demographic, technological and other structural trends may affect the economy and the budget.

Both Victoria and Ian during the session, provided a modelled view of the future over the next 40 years. The report, the fifth of its kind, delivers three key insights:

1. Our population is growing slower and ageing faster than expected.

3. While Australia’s debt is sustainable and low by international standards, the ageing of our population will put significant pressures on both revenue and expenditure. 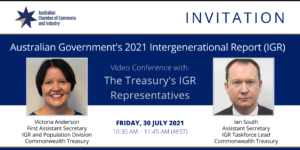