Labor will support tax cuts for Australian’s earning up to $200,000 and remove its controversial proposed changes to negative gearing.

The Federal Opposition Shadow Cabinet on Monday locked in the new policy positions ahead of the next federal election.

“Labor is providing certainty and clarity to Australian working families after a difficult two years for our country and the world,” they said.

“Our focus is on making sure Australia emerges from this crisis stronger and more resilient – with an economy that works for working families not the other way around.”

The ALP will also not repeat its promise to limit negative gearing to new housing, which created a backlash from opponents before the last federal poll.

Along with the negative gearing shift, Labor confirmed it will dump a pledge to halve the 50 per cent capital gains tax deduction.

“When it comes to the economy, the next election will be about the Government’s dangerous and costly failures to manage the pandemic,” Dr Chalmers said.

The Australian Chamber of Commerce and Industry (ACCI) held a zoom conference with Jim Chalmers Opposition Treasurer and Federal Member for Rankin in Queensland.

At this video conference, Jim outlined his thoughts and Labor’s priorities in relation to the COVID19 crisis and managing Australia’s economy through the current situation, the economic recovery and post pandemic.

After Jim’s presentation he answered a large number of questions from business leaders across Australia. 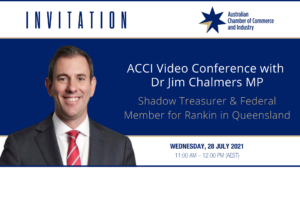