David Gruen said that the Australian Census would show the impact of the coronavirus, particularly around work patterns.

Hours worked, employment and labour force status will all be affected by the millions of people under lockdown orders across Sydney, Melbourne and elsewhere. Even the question about income – with hundreds of thousands of people receiving government payments – will be distorted by the pandemic.

Dr Gruen also expects more detailed information to be revealed about the movement of people out of the nation’s capital cities and into the regions.

“There are things going on about where people are living,” he said.

More than 10 million forms are expected to be completed, with the first results due to be released in June next year.

The Australian Chamber of Commerce and Industry (ACCI) held a zoom conference with Dr. David Gruen, Australian Statistician, Agency Head of the Australian Bureau of Statistics.

On Tuesday 10 August, Australia completed the 2021 census. The Census is a snapshot of who we are and tells the story of how we are changing.

At this session, Dr Gruen spoke about the data generated by the Census and its role in helping governments, businesses, researchers, not for profit and community organisations make informed decisions.

After his address, Dr Gruen answered many questions in the Q&A from business leaders across Australia. 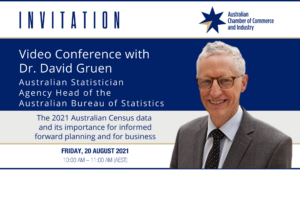