ACCI Zoom Conference with Michael Falinski MP, Federal Member for Mackellar, Chair of the Standing Committee on Tax and Revenue on Inquiry into Housing Affordability

A federal parliamentary inquiry has been set up to investigate the challenge of housing affordability in Australia.

Chaired by government MP Jason Falinski the House of Representatives Standing Committee on Tax and Revenue will investigate the impact of tax and regulatory regimes on price, affordability, and supply of housing in Australia.

Jason pointed to supply as the key concern, arguing that restrictive planning laws and regulatory settings were to blame for ongoing unaffordability, rather than tax settings.

“Arguments about the impact of increased subsidies and tax concessions on housing have continued for some time,” said Falinski. “There is ample evidence that points to the small effect such measures have on supply, indeed the research points to limitations on land and restrictive planning laws as the major causes of shortages in supply. As consistently noted by the RBA and others, regulatory settings are directly responsible for the unresponsive nature of housing supply in Australia.”

“As data provided by the Reserve Bank of Australia (RBA), the Treasury and the Australian Bureau of Statistics (ABS) shows, home ownership, one of the building blocks of Australian society, has been falling for the last 30 years. In my view, this represents an urgent moral call for action by governments of all levels to restore the Australian dream for this generation and the ones that follow.”

“What is driving up house prices now has little to do with zoning, and it is happening worldwide.

The parliamentary committee is inviting submissions from individuals and organizations, which can be made until 13 September.

The parliament last investigated the housing affordability challenge in 2015 through the Senate Standing Committee on Economics. The committee made 40 recommendations, including the appointment of a minster for housing, a national affordable housing plan, and a separate inquiry into prefabricated housing. The government rejected all but nine of the recommendations including a recommendation to study the effects of negative gearing and capital gains tax discounts on affordability.

ACCI held a zoom session with Jason Falinski and over 60 business leaders from across Australia.

Following his address Jason answered many questions from the attendees. 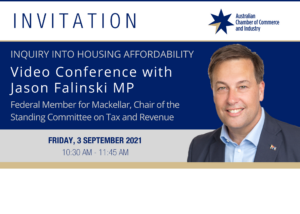