Prime Minister Scott Morrison is “very keen” to get a net-zero by 2050 commitment by the COP26 Climate Change Conference, according to The Australian’s National Editor Dennis Shanahan.

“And the way he’s doing this, he’s trying to sell an economic prize,” Mr Shanahan told business leaders from the Australian Chamber of Commerce & Industry today.

“He is actually selling an economic solution to try and provide continued jobs in the regions and in mining.

“And to lock in participation with the rise of countries like Malaysia, Vietnam, the Phillipines, Indonesia, so that we diversify our markets and become enmeshed in these growing markets in a way that we were never allowed to be enmeshed with the market in China.”

The  Australian Chamber of Commerce and Industry held a zoom session with Dennis Shanahan, National Editor of The Australian.

Dennis has been The Australian’s Canberra Bureau Chief, then Political Editor and now National Editor, based in the Federal Parliamentary Press Gallery, since 1989 covering every Budget, election and Prime Minister since then.

Direct from following Prime Minister Morrison on his strategic trip to the US, Dennis Shanahan provided his thoughts and observations on current affairs dominating the news including the COVID19 roadmaps to recovery, the Prime Minister’s United States visit, the AUKUS Alliance and the next Federal Election.

Following his address Dennis answered a myriad of questions from business leaders across Australia. 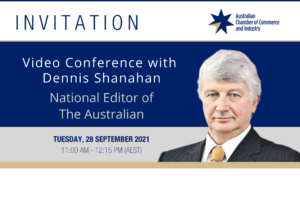