On 15 June 2021, Australian Prime Minister, Scott Morrison and UK Prime Minister, Boris Johnson announced core elements of the Australia-United Kingdom Free Trade Agreement negotiations. The Australia-UK FTA is set to increase the flow of commerce and trade between Australia and the UK, particularly through the removal of significant tariffs on goods and introduction of broader labour mobility provisions.

Australia is seeking an ambitious and comprehensive Free Trade Agreement (FTA) with the United Kingdom of Great Britain and Northern Ireland (UK) that drives increased trade in goods and services, two-way investment, economic growth and job creation. An FTA with the UK also signals our shared commitment to open markets, free trade and the rules-based global trading system.

The FTA will make it easier for professionals including lawyers, accountants, engineers and architects, to transfer and use their qualifications in the other country including accessibility for Australian lawyers to practise foreign and international law in the UK, including in arbitration, mediation and conciliation proceedings. 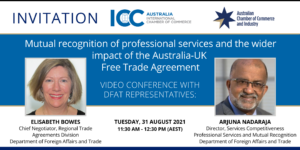